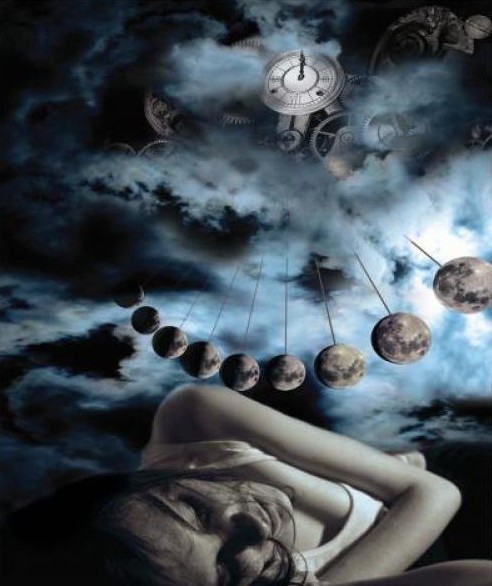 For centuries legends have persisted that directly link the phases of the moon to the behaviours of human beings. In addition to the legends of werewolves, the word lunacy derives from the word for the moon, Luna, because of the supposed effect of the moon in causing madness. By the 1980s there were over 80 published studies on this aspect alone. Real, coincidental or imagined, following the path and phases of the moon can assist in the prediction of human behaviour. As you begin using the Druidcraft calendar on a daily basis, you may begin to notice patterns of behaviour both in yourself and those around you.

A 2013 Swiss study based on data collected years earlier with no view of trying to correlate sleep patterns with the moon, found that the moon has a significant impact on sleep. Further studies have been conducted since with mixed results. Some showing a correlation and others not. Some found significant impact around the full moon, others around the new moon. This could mean that the moon has no effect on sleep after all, or it could mean that we all respond to the phases of the moon slightly differently, just as different people’s menstruation cycles occur at different points in the month. Lack of sleep can lead to irritability among other things, so again you may notice correlations between the irritability of those closest to you around certain moon phases, especially if they suffer with insomnia or other sleep disorders.

The most obvious link between humans and the moon is the similarities in the length of the sidereal month (the time it takes the moon to complete one orbit of the earth) and the human menstruation cycle, both of which are slightly under 28 days. The hormonal fluctuations women experience during a sidereal month can have a very real impact on moods and emotions. This cycle can easily be tracked using the moon ring, and you may notice a pattern of behaviours coinciding with certain points around the calendar. Men of course also experience hormonal cycles too, but all the research suggests this is a daily cycle rather than a monthly one. There have also been claims that children are more likely to be born around the full moon, but multiple studies have now shown this not to be the case.

Two separate studies have shown that people diagnosed with schizophrenia exhibit increased aggression and violence during the full moon. A more recent study found no correlation between nonschizophrenic humans and the moon. Analysis of the data suggests that the moon phase has a significant effect on such individuals. The moon phases are of course tracked with the lunation ring on the calendar. In 2007 senior police in Brighton, UK, announced that they were going to deploy more offices around the time of the full moon. This was based on research conducted by Sussex police that concluded there was a rise in violent crime when the moon was full. Police in Kentucky and Ohio in the US have also reported rises in crime on the full moon.

Concluding a relationship between human behaviour and the moon remains controversial. What is less controversial is that several studies have concluded correlations between moon phases and certain animals. Streamlined spinefoot spawn synchronously around the time of the last moon quarter. In Orange-spotted spinefoot, the lunar phase affects the levels of melatonin in the blood (the sleep hormone). It has been noted too that Honey Bee weight peaks during the new moon.

The spawning of coral occurs at night during the summer on a date determined by the phase of the moon. In the Red Sea this is a three to five day period around the new Moon in July and August. Acropora coral time their release of sperm and eggs to just one or two days a year, after sundown with a full moon.

In the parts of Indonesia and Polynesia the local priests predict the occurrence of a special food, and their lunar calendar was set by the event. During a waning moon at a certain point in the year the Palolo worms lose a part of their bodies, which floats to the surface releasing sperm and eggs. These body parts are gathered as a local delicacy.

In 2000 a study found an increase in the number of humans suffering animal bites around the time of the full moon, and in 2016 a relationship between the moon and the birth rate of cows was reported.

There is also the popular belief that the moon can affect plants, and tradition and folklore suggest that certain plants and herbs should be gathered at certain moon phases.

No one is really sure if the moon really has any impact on our behaviours. Studies have “proven” the theories both true and false. Science is a lot quicker to accept correlations in the animal kingdom than with human behaviour. If the moon does have an effect, then no one is really sure why. Theories include the gravitational pull on or bodies, though it is suggested this is too slight. Other theories include the amount of light in the night sky, with a fuller moon reflecting more light. Also, positive ions increase around the full moon, and this has been suggested as a direct cause.

Whatever the cause, after over a year of using the Druidcraft calendar, I feel there is validity in using it to inform predictions around the behaviour of humans, whatever the true cause is. And if the moon has such direct correlations with human behaviour, is it really so farfetched to think that the other bodies in our solar system, the planets, may also have an effect on our behaviour?