As the sun peg comes into alignment with the descending node peg, the Druidcraft Calendar indicated to us that an eclipse season is almost upon us.

On the 1st of Cold Come (7th of January 2019 GMT) during the new moon, the calendar predicts a possible solar eclipse. And indeed on the 6th of January a partial solar eclipse over the north pacific will occur. The discrepancy in date is due to two factors. The first is the difference between the local timezone where I am viewing the calendar (GMT), and the time zone where the eclipse will occur. The second factor is that the moon peg has to work on the average time it takes for the moon to orbit the earth, when in truth it is a variable amount of time as the moon gets closer and farther away. This means that at times, there is a slight discrepancy in the actual position of the moon, and the location of the moon peg. However, because the moon peg tracks the average, over time the peg corrects itself and is accurate most of the time.

The lunar eclipse at the end of January is the first full moon of the lunar year, and the second full moon in the new solar year, exactly one month (lunation cycle or synodic month) since the full moon at the winter solstice.

As we begin the dark half of this year, we enter it with the winter solstice coinciding with a full moon, followed by a partial solar eclipse at the new moon a fortnight later, and a total lunar eclipse a fortnight after that at the next full moon.

Full Moons are a time of relationships and family. A time to focus on your emotions and intuition. Having the first full moon of the dark half of the year coincide with the winter solstice, it emphasizes the celebrations of the rebirth of the sun, and suggests a time of deep magic, incubation and new endeavors.

Dark moons have associations with the completion of one cycle and the beginning of a new one. The partial solar eclipse that occurs at this time accentuates this. It is suggestive of a time of new possibilities, a time to question old habits and embrace new things, and it continues the theme of the winter solstice.

With the next full moon we have the lunar eclipse, which has similar associations to the last full moon, only there is much less influence of the sun, but much stronger emotional and inward focused influence and it completes the eclipse season.

It is interesting to note how this series of events can be understood in mythological terms. The winter solstice is often seen as the time of the rebirth of the sun god, who is born of the goddess. The full moon is often seen as the pregnant expectant mother. In Irish mythology, the Dagda came to the “house of famous Elcmaire” (Newgrange) and impregnates Bóinn, making the sun stand still. This seems to refer to the famous winter solstice alignment at Newgrange where the light fills the chamber and passage at the winter solstice sunrise. In this instance Newgrange is representative of the earth or mother goddess womb and the penetrating light the sun’s penis. This suggests mythology of the sun mating with the earth, rather than the sun being born. This play of light and shadow can be seen at other ancient monuments too.

The axis of alignment at Stonehenge points towards the winter solstice sunset rather than the sunrise like at Newgrange. During the summer sun rise though, the shadow of the external Heel stone is cast into the circle and onto the Altar stone. Archeologist Terence Meaden has shown that this interplay of light cast by “male” stones on to “female” stones can be seen at all eight of the festivals in his studies of Stonehenge, Avebury, Dronbeg and other stone circles. Researchers had also long been aware that the Triathlon stones at Stonehenge (the big inner horseshoe shaped bit) are “skewed” in relation to the rest of the monument. It was assumed that this was the result of mistakes made when some of the stones were re-erected in 1901, but it has now been shown that the largest stone at the end of the inner horseshoe aligns with the winter solstice sunrise and was placed there deliberately, meaning that the monument marks the the sunrise and sunset on both solstices, and explaining the skew of the triathlons.

The dark moon is usually considered a liminal time. A time in between times when the moon disappears from view. With the eclipse we have the moon appearing during the day to cover the young sun and bring darkness to the day. But it is only a partial eclipse. Some see solar eclipses as a mating of the sun and moon, others see it as a battle between the deities of the sun and moon or night and day.

The first known record of a solar eclipse is to be found in Ireland at “Cairn L” on Carbane West, at Loughcrew, outside Kells, in County Meath. Of 92 calculated eclipses visible from Ireland, only the eclipse of November 30, 3340 BC matches the diagram. 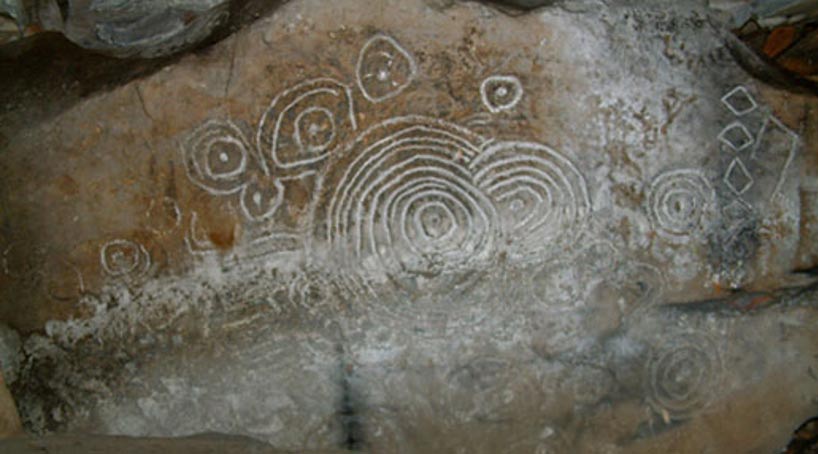 The Irish Celts who inherited the lands from their neolithic ancestors continued to see the Cairns and other monuments left behind as special magical places. It has been shown the sun illuminates a chamber in the monument on November 1 and February 2 (Samhain and Imbolc), important dates in the Celtic calendar. It has also been suggested that the Celts held a “festival of lights” to welcome the eclipse, though this name has also been suggested for the celebration of Imbolc. Imbolc is sacred to Briganti (the high one, exalted one, shining one), and has associations to the returning light, spring time, and the sun. Could the eclipse also have links to Briganti? It is interesting that Imbolc is only 10 days after the Lunar eclipse at the end of the sequence we are discussing.

The lunar eclipse is a lot like seeing all the phases of the moon in one night. Starting with a full moon the shadow of the earth begins to cross the moon, and it appears to wane until eventually it is totally dark, then as the shadow progresses the moon begins to wax back up to the full moon. Again, different cultures have attached different myths to this. Many of the myths are of the moon being attacked, such as the Inca myth of a jaguar attacking and eating the moon. From the evidence of the Coligny Calendar we know that the lunar phases were very important to celtic society, and we know they could predict both lunar and solar eclipses. Elatha is the suggested Irish moon god, father of Bres (who is Brigit’s husband), though he has also been suggested to be a sun god.

A more common moon association that is still rather present in the popular imagination is the link between the hare and the moon. This link is recognised throughout the ancient world, because of the image of a hare that can be seen on the surface of the moon. Hares and the moon are linked to femininity and intuition, shapeshifting and carrying messages between the worlds. When the queen of the Iceni, Boudica, divined what to do about the Romans, she released a hare from her robes. Its directions determining her direction. To eat a hare was taboo in the UK and Ireland.

Of course, the druidcraft calendar doesn’t force any particular set of myths on you. It simply highlights the movements of the sun and the moon allowing you to draw your own conclusions, or attach your own myths. So perhaps the question to ask yourself is how does this fit into your own practice? What myths do you attach to it?