Moon Names around the world and the importance of Blue Moons

In this article I would like to discuss the naming of moons, and the importance of Blue Moons in doing so. I will also share some of the various names for the full moons or months in a year recorded by different cultures around the world. It is easy in this day and age to get caught up in the media popularization of “super blood wolf moons”, but often these terms such as “wolf moon” are borrowed from specific individual cultures. This is done without any knowledge of where the term came from, or the meaning, associations and beliefs behind the term by most people. So rather than fall victim to accusations of cultural appropriation I thought I would post about the names for moons used by other cultures, and some of the difficulties in naming full moons in a calendar system.

An observable lunar calendar that follows the waxing and waning of the moon will in general have 12 months per solar year, with an extra intercalary 13th month every two and a half years or so. This is because 12 lunar months is shorter than a solar year, and 13 lunar months is longer. This means that although there are normally 3 full moons per season (12 / 4 = 3) every so often, the first full moon falls right at the beginning of the season, and you get 4 full moons before the next season starts. The third of these four moons is known as a Blue Moon.

There is another definition for Blue Moons that is a result of a misunderstanding in the 1940s. In 1937 Laurence J. Lafleur published an article in the Maine Farmer’s Almanac describing Blue Moons. Then in 1946 amateur astronomer James Hugh Pruett published an article in Sky and Telescope magazine citing Laurence J. Lafleur’s previous article, however he misunderstood the original article and added:

“Seven times in 19 years there were — and still are — 13 full moons in a year. This gives 11 months with one full moon each and one with two. This second in a month, so I interpret it, was called Blue Moon.”

In his article Lafleur was referring to the topical or seasonal year, and not the calendar year.Pruett did not spot this detail and made a false assumption. Yet because the article was published in a popular scientific magazine with a large circulation, it was from then on cited enough over the following years that this mistaken definition became the accepted one.

This definition is based on the Gregorian calendar, and as such is discounted for the remainder of this article. Here we focus on astronomical or seasonal Blue Moons which are defined by the timings of the sky, rather that where the full moon happens to fall on the Christian Gregorian calendar.

The sequence of Blue Moons is very predictable. Over the course of 19 years the patterns of the moon and sun re-align. This is known as the Metonic sequence or cycle. During this 19 year cycle, a season with 4 full moons will occur 7 times. In fact, if you look at the Druidcraft Calendar, you can see that there are 7 leap years in a cycle, and this year (2019) is the 6th leap year of this cycle (year 17). This means we will have 13 full moons this year, and the Blue Moon will occur this year on the 18th May. In the 19 year cycle the Blue Moons will almost always occur in the 3rd, 6th, 8th, 11th, 14th, 17th and 19th years. Where exactly in the year, in which season the blue moon will fall is another matter.

Blue moons are worked out based on what are called the astronomical seasons. Each season starts with either a solstice or equinox. So astronomically spring begins on the spring equinox and ends at the summer solstice. However, the orbit of the earth around the sun is not even, resulting in seasons of different lengths. 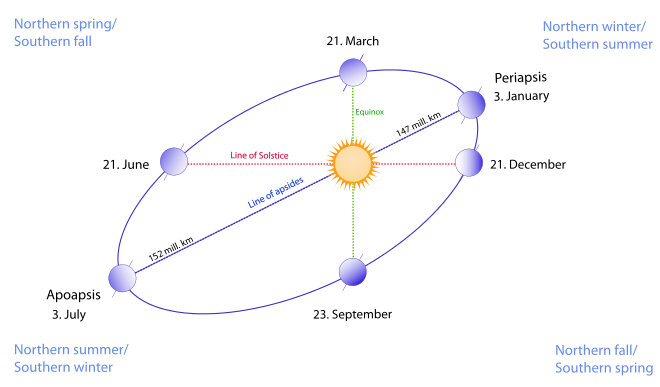 What this means is that summer and spring together at 186.4 days is considerably longer than winter and autumn together at 178.84 days in the northern hemisphere. 7.56 days longer to be exact. It is therefore much more likely that a Blue Moon will occur in summer and spring, as opposed to winter or autumn. Between the years 1910 and 2097 there are 34 summer Blue Moons and 29 spring Blue Moons. Yet during the same period there are only 6 Autumn Blue Moons and 2 winter Blue Moons.

The exact sequence that determines which season a Blue Moon will fall in is difficult to pin down, and I am yet to fully discover any recognisable pattern. The data I was able to find available online was limited to 200 years, so in order to understand Blue Moons correctly beyond that I create a new calculator that will generate a list of Blue Moons from any given year. I was then able to determine that the average sequence for Blue Moons in a Metonic Cycle looks like this.

But this is just the average, any one of the years can have a Blue Moon in any season, it is just much more likely it will be in the season mentioned above.

Spotting a Blue Moon on the Druidcraft calendar.

It is actually very simple to spot a Blue Moon coming using the Druidcraft calendar.

What has all this got to do with moon names?

What this means is that if you want to name the full moons throughout the year, and maintain any synchronization with the seasons you need the 12 standard moon names for the 3 moons per season, and at least one additional moon name for the 13th month even if you just refer to it as the Blue Moon. The problem is the 13th moon could fall in any season. So you could have as many as 4 additional moon names, depending on where in the year the Blue Moon occurs resulting in as many as 16 moon or month names in total.

If you are creating a lunar calendar you have a few choices. Regardless, you usually end up with 12 or 13 moon names. You can choose to follow another cycle of the moon, such as a 28 day “lunar” calendar which with some correction can follow the sidereal month, but then you are not naming “full moons” because the sidereal month is not the cycle that determines the lunations of the moon. Another option is to have 12 months and not name them with any relation to the seasons, understanding that if you have a “cold month”, after a few years it will end up being in the middle of summer. Or you can introduce a 13th month for the Blue Moons, which will keep your calendar more in sync with the seasons. For this reason I would suggest that where we see a calendar of 12 moon names and they are named after seasons, this is a clue that there is a missing 13th month, or the months are not the names of full moons. The final option is to divorce the concept of a month from the moon, and use it simply as a division of days of a solar year, as we do today with the Gregorian calendar.

The following tables detail the names of the moons from cultures all around the world. Some of the lists are incomplete. Some of them, we do not know the calendar system they were a part of and so do not know if we are missing moon names. Where the intercalary month has been identified, it has been highlighted in red. This list of moon names will therefore remain a work in progress and be updated as and when new information is discovered. If you are aware of any that are not currently on the list, then I encourage you to comment on this article. For now though, here are the names of the moons from around the world starting with the moon after the winter solstice where I was able to determine it.

Get your own calendar today!

During the coming night, more on Monday morning, there will be Moon eclipse. I had of course a look how this event is reflected on our Druidcraft calendar as this is the first time of such an event since I have it. So, I think you can roughly see the constellation where the yellow sun peg and the white moon peg are lined up between the red pegs of the most outer ring. It is not 100% in line, but it seems to be enough for the eclipse. ... See MoreSee Less

I would like to add the heliacal rising of the major fixed stars to the online calendar over the next few weeks. I am currently struggling to get the calculation/code to work correctly but in the meantime I have discovered something quite interesting. It turns out that in the Uruk scheme (the Mesopotamian 19 year calendar that predates the Metonic system) each star had a 'usual' month and an early and late month due to the shifting nature of the lunar month in relation to the solar/stellar year. when a star rose late or early it was considered ominous. This kind of identification of an ominous moment would of course be possible using the Druidcraft Calendar too, but it is entirely absent from modern astrology or esoteric gregorian calendar studies. ... See MoreSee Less
View on Facebook
· Share

I am so thankful to find this group and calendar. I was trying to expand my personal calendar to have all these movements, I pictured this exactly in my mind but could never get it all together. For 15 years I had my own that I had made following the SUN ORBITS AND LUNAR CALENDAR from the 2nd chapter of Enoch. It is very simular but not as accurate. I am looking forward to this addition to my Daily Ritual! ... See MoreSee Less
View on Facebook
· Share

Theme by Anders Norén — Up ↑

It's here at last! Get your Druidcraft Calendar today! Dismiss