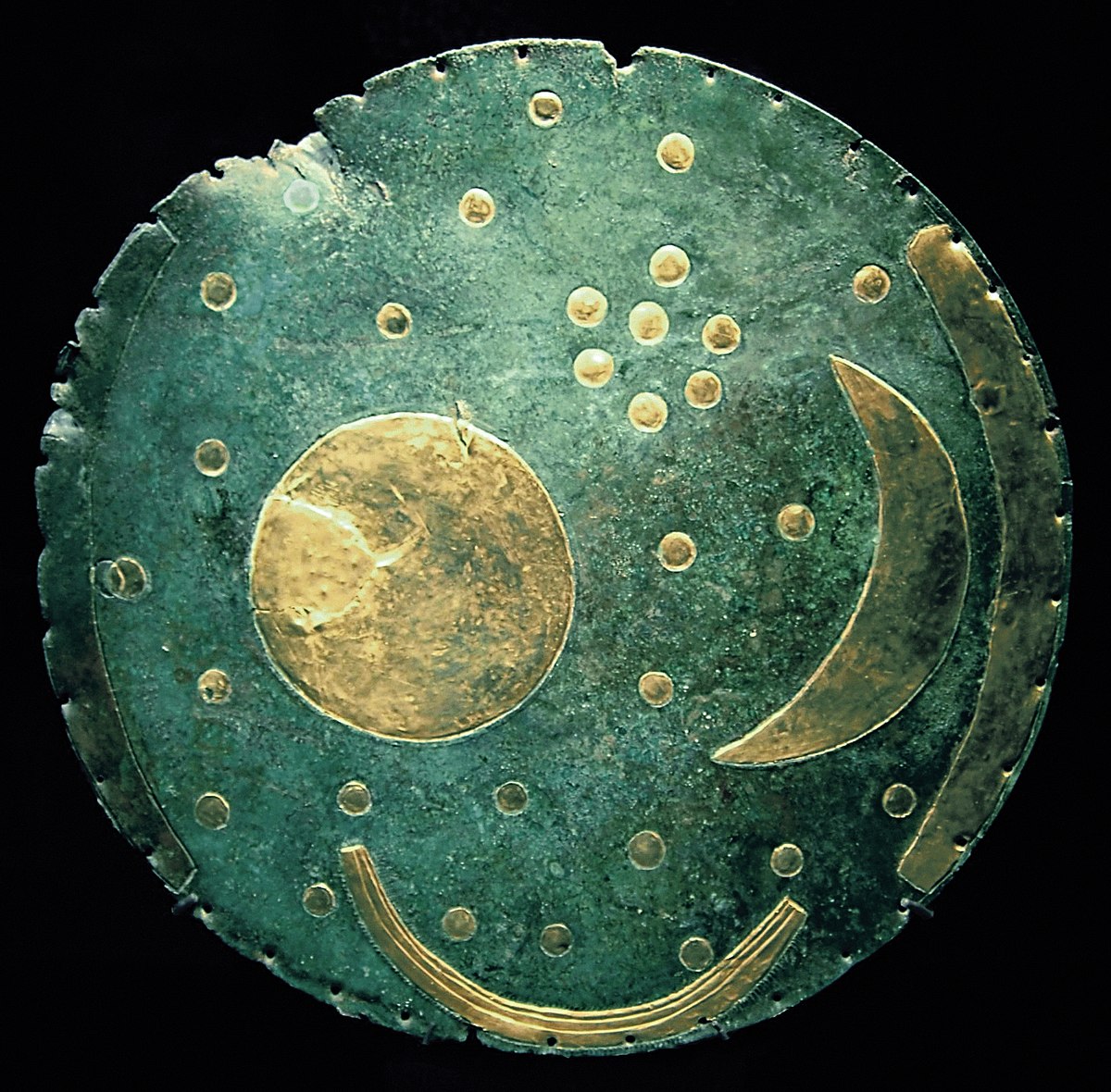 In my last article in this series I discussed a number of prehistoric calendar sites that show that early humans were concerned with reconciling the movements of the sun and moon in order to follow a lunisolar calendar.

The problem with reconciling the movements of the sun with the movements of the moon is that the time it takes for 12 full lunation cycles (full moon to full moon) is 11 days shorter than the solar year. In order to keep the moon months in line with the solar seasons a 13th month must be added roughly every two and half years. The problem is knowing exactly when to include this 13th month.

Found in Nebra, Germany in 1999, the sky disk was initially thought to be a fake due to the circumstances around its discovery.  It was found by metal detectorists who went on to sell it on the black market. It was only later when it was seized by the authorities that it was confirmed that this is infact a Bronze Age astronomical device. It is around 30cm in diameter, weighs 2.2kg and has been dated to around 3700 years old. This places it neatly between the time of Stonehenge or the Vučedol Calendar at around 5000 years old, and the first known written astronomical/calendar calculations of the Babylonians, the Mul-Apin around 2700-2800 years old. The Mul-Apin is said to be a “compendium of astronomical knowledge from the earliest times”.

The sky disk appears to depict the sun or full moon, a crescent moon and what seem to be 32 stars at random, although the cluster just above centre appears to be the Pleiades constellation or seven sisters. It also has a gold band on each side which seems to indicate the rising and setting position of the sun on the solstices. At 82 degrees between the summer and winter solstices, this would only work for a limited range of latitudes that stretches across central europe at around 51 degrees. This would include other famous sites such as Stonehenge at 51 degrees, 10 minutes. It is interesting to note that the gold used in the stars came from the river Carnon in Cornwall, and the tin used in the brose is also of Cornish origin. There is also another gold arc at the bottom known as the “sun boat”.

Before around 500BC (2600 years ago) the Babylonian calendar was entirely observational. According to their rules the 13th month was only added to the calendar when the moon and the pleiades are in the positions depicted on the sky disk, which occurs roughly every two and a half years.

It is believed that the sky disk was therefore intended as a map of the cosmos, showing the positions of moon and stars when a 13 month must be included in the calendar. 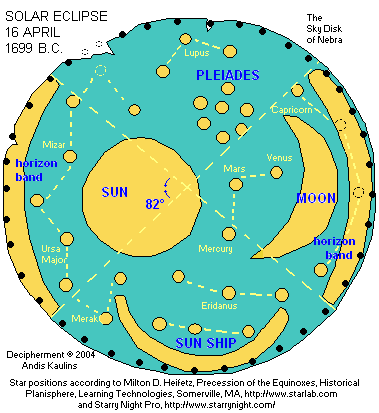 This means that long before Meton of Athens recorded what has become known as the 19 year Metonic cycle in 432BC, which he probably learned from the Babylonians who first recorded it around 499BC, Bronze Age Europeans were measuring the sky and reconciling the movements of the sun and moon in order to create a 19 year lunisolar calendar. I suspect however, due to the age of Warren Field monument in Scotland that we humans had been calculating when to include a 13th month for many thousands of years before the Nebra sky disk was forged. It is due to the antiquity of the Metonic cycle that the Druidcraft Calendar is also based on this most ancient of calendar systems.